It had been 5 years since I last went to FanimeCon.

I was surprised by the number of cosplayers. I think most people were in costume of some kind. Back when I first started going to the con, maybe only 15-20% of attendees cosplayed. I was also impressed with the quality of the cosplay. Most of the cosplay I saw back when I first went to Fanime in 2001 was really crappy. They were mostly costumes people put together at the last minute.  But this year a lot of people had really fantastic costumes. I took almost 300 pictures at the con. Seeing all of the greatcosplay really inspired me to want to make more costumes and do even better next time.

My favorite costumes were the creative ones. Like this costume of Cloud in drag. Remember the part in Final Fantasy VII where you have to dress Cloud like a girl so he can pass as a prostitute? 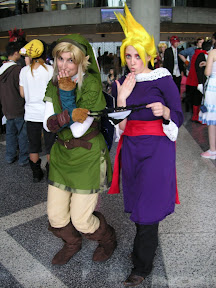 Link was popular and I think I got a photo of almost every single one at the con. I saw Links from Wind Waker, Twilight Princess, and Ocarina of Time. There was even a WW Link in his pajamas which was super cute. 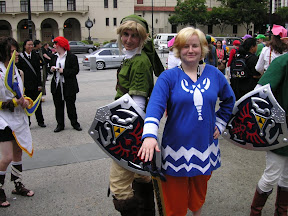 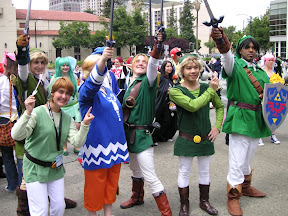 And whenever Link and Zelda stood next to each other, the cameras started shooting like crazy. I saw three Princess Zelda’s at the con and they all looked great. But I think this one was the best one. 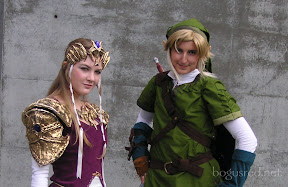 There was one Link in particular that I had a couple of memorable moments with. I took a photo of him and then my friend Potter said I should get a photo of the two of us battling. I asked him "Hi Link, can we battle?" And he said, "Oh… No sorry" and I said "No, I mean for a photo." And he said "Oh!Ok !" I guess he was afraid of me and thought I meant to really fight? One other time, my friends and I and some other people were on a crowded elevator. It stopped at a floor and the same Link walks on and Potter jokingly says to him "Oh sorry, no Links allowed on this elevator." And he walked off of it! Everyone felt bad for him. Link, I’m sorry my friend was so mean to you! 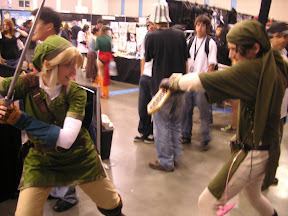 If there’s one thing I’ve noticed, it’s that girls LOVE Link. If you are a guy and want to get some love at the con, cosplay as a decent Link and random girls will glomp you and hug you. I think I got hugged by 30 different girls and even a few guys. A lot of people wanted to get their picture taken with Link also. I really enjoyed playing the part of Link and getting my picture taken. Though I think I could have done some better poses. I look too girly in my pictures. I will practice some better poses before the next con. 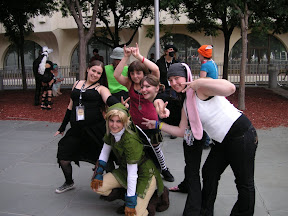 There was this one group of girls that kept sneaking up behind me and yelling "Hey! Listen!" It wasn’t until the third time that I finally got what they meant. They were imitating the annoying fairy, Navi, from Ocarina of Time who always says "Hey! Listen!" When she has something important to say. Other hi-jinks were abound at the con as well. There was a game of "Link tag" going on Sunday at one point.

So I’m feeling depressed that the con is all over. I’m starting to make plans with my friends to attend AnimeExpo in July. I’m also starting to think about what to cosplay for next year. I’d like to do what i did last time and create my costume for Halloween then reuse it at Fanime. So far my plan is to create an Ike (from Fire Emblem) costume for Mike to wear. I may create a simple costume for myself or I may not even go through the trouble of creating a new costume. I have so many other projects right now I shouldn’t start another one.

My Link costume still needs some work. My arm guard thingy that goes on the sword hand looks like total crap. I put it together really quickly so that’s why it looks crappy. I will work on an improved version before the next con. I also want to try and create a new hilt for my sword. The chain mail situation doesn’t look good. I had created enough for the rims of my tunic but when I attached them it made the tunic sag and look awful so I ended up not using it at the con. I tried making a wider length of mail but with the gauge and size of the rings I’m using its really difficult to link them together. So I’m going to  start over with bigger, thinner rings. I’ve signed up for a photo shoot with Consplayers.com at AX. Hopefully I’ll have all the tweaks and the chain mail done by then.