AnimeExpo is this weekend. Some friends and I will be making the 6+ hour drive down to LA on Thursday night. I’m really excited. I’ve never been to an Anime con other than Fanime.

I’ve been feverishly working on my Link costume to get it finished in time for the con. Originally I was going to be in the Masquerade. However, a week ago I found out that if I wanted to be considered for a craftsmanship award I needed to sign up for a craftsmanship meeting. Sign ups for that happen on Thursday only and since I’m only going to be there Friday-Sunday, there would be no way for me to get one. So I dropped out 🙁 But maybe I can compete next year.

The first thing I’ve been working on is the Chainmail. I’ve finished the upper chainmail shirt and its ready to wear. I’m still working on the skirt. I don’t think I’ll have enough rings nor the time to make it all into one long shirt piece. But I think I’ll at least have the upper chainmail that shows. Here’s a picture of what it looks like. I’ll be working on the skirt during the road trip down and late at night in my hotel room.

Next, I needed to remake that crappy sorry excuse for a gauntlet. The first one I had made really quick before the D-Day event at SJSU and then tried to rush it again for Fanime. It was complete enough to wear, but it looked like crap. Other Twilight Princess Links at FanimeCon had much better one’s than mine.

I decided to scrap it except for the straps. I made a new one out of craft foam and it turned out wonderfully. I then painted it using Liquitex professional paints. I’ll post a more detailed blog entry later on how this piece was made. Check it out… 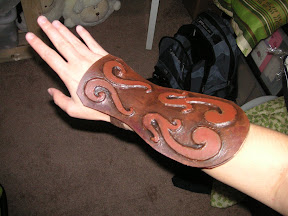 Lastly, I decided my sword needed some reworking. I ripped off the hilt and started working on a new one out of craft foam. But I’m a little worred because the blade may fall off the hilt if I’m not too careful with it. I still have a lot of work left to do on this so I don’t have any pictures to share yet. I’m staying up late tonight and working all day tomorrow on it. Hopefully it will be done before I hit the road!

Ok so when I started working on this sword, I was really unsure and many times through I was freaking out and thoughts like  "Man… there’s no way this is going to work…," "how the heck am I going to do this?,"  "I have no idea what I’m doing," and "You are an idiot for doing this at the last minute" kept popping into my head.

But now my sword is actually starting to come together nicely. There will be many details that will be left out in the interest of time including the little gold jewel, some sculpting on the handle, etc, but I can always add those later. All that’s left is to wrap a piece of foam around the handle portion and paint everything. (Please note that the color you see on the hilt is the color of the craft foam and will not be the final color.)

There are also a few proportional issues with the hilt. Namely, the blade is too small for that big hilt. But you know what, craft foam is hard to work with! And I think it looks pretty good.